I follow a number of specifically Hindu / Ganapatya blogs (surprise, surprise!), some of which are open to the public, some not. Recently one of these places posted something that I’ve written about before, but wanted to share about again. It deals with something that possibly could fall under eschatology as far as Sanatana Dharma is concerned, but not exactly.

Every religion has a story about the “good old days” as well as the progression of everything leading up to today, which is almost invariably the worst time ever to be alive.

Within the Hindu version of all this, much of the “story” often follows closely with actual events or themes in society. Following is an interesting image which I hadn’t seen before and some other Kaliyuga info, similar to what I’ve already known, but slightly different too. It was all taken from The Journey of The Soul blog. 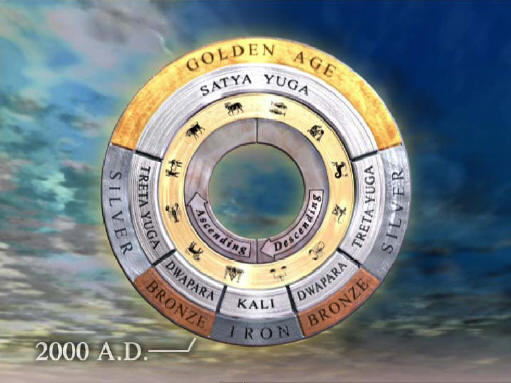 The beginning of the kali yuga, according to the astronomical information from Mahabharata and other Vedic scriptures, started at 2:27a.m. on February 18th in the year 3102 B.C. By the time the age of Kaliyuga ends, the bodies of all creatures will be greatly reduced in size. The maximum duration of life for human beings will become fifty years.The path of the Vedas will be completely forgotten in human society, and so-called religion will be mostly atheistic. The kings will mostly be thieves, the occupations of men will be stealing, lying and needless violence, and all the social classes will be reduced to the lowest level of śūdras. Cows will be like goats, spiritual hermitages will be no different from mundane houses, and family ties will extend no further than the immediate bonds of marriage. Most plants and herbs will be tiny, and all trees will appear like dwarfśamī trees. Clouds will be full of lightning, homes will be devoid of piety, and all human beings will have become like asses. At that time, the Supreme Personality of Godhead will appear on the earth.

The recitation of the Chandi Path or Devi Mahatyma is one of the uncursed great spiritual books in Kali Yuga. Every other Mantra is cursed and requires actually an Shapoddhara (Curse removal ) for them to give you full benefit.