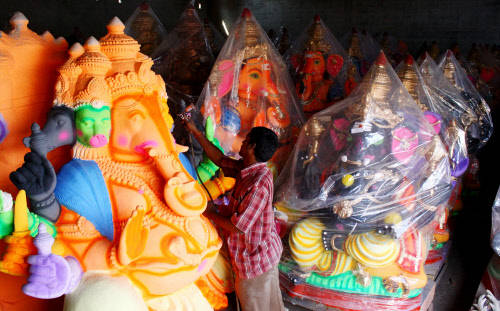 I found a story about Ganesha in a book I’m working through currently. The chapter I just finished is about myths surrounding Ganesha – of which there are many. I may share other stories, but this one struck me. The author, before detailing the myth, points out that Ganesha is easily pleased, but only if there is sincerity in the devotion – which invariably results in rewards for the humble and retribution for the arrogant. The author points out, too, that this story illustrates his compassion for all. I can think of many other things this story tells us about the nature of Ganesha. Can you?
—————————————————————————————————————————————

One day Ganesha was seized with a longing to eat kheer. He disguised Himself and set off, armed with a pinch of rice and sugar, and a teaspoon of milk. He presented these to everyone he met and asked them to make him some kheer. Only an old lady took pity on the lad. She brought out a small katori and prepared to put the ingredients in it to cook the sweet-dish. Ganesha asked her to put them in a large pot. She tried to explain that it was unnecessary but to please him she did as he asked. And of course, as the kheer cooked, it filled the pot.

While the rice and milk cooked, Ganesha went for a walk. But the kheer was ready long before he returned. The smell was mouth-watering and the old lady couldn’t resist tasting the kheer. But before she did so, she invoked Ganesha in her mind, inviting him to partake of the kheer. One spoonful led to another, till she had eaten almost half the pot.

The old lady invited him to eat, but Ganesha replied, “I have already eaten the kheer.” Then he appeared before her in all his celestial glory and showered her with gifts