According to Satguru Sivaya Subramuniyaswami in Loving Ganesha, “Lord Ganesha is invoked through the mantra Aum. The Mandukya Upanishad elucidates the inner meaning of Aum, which embodies the highest wisdom… A represents the waking state. U represents the dreaming state. M represents the state of deep sleep. Aum in its entirety, plus the moment of silence which follows it, represents the shanti, the peace beyond understanding (I think this is a biblical reference). Thus, Aum japa performed as an invocation to Lord Ganesha, the Lord of Wisdom and Knowledge – while love is welling up from your hearts and tears are for no reason flowing simultaneously – calls forth the knowledge of the entirety of our existence in these four categories of consciousness. These are realms that God Ganesha rules over as Lord of Categories, and this is the knowledge that He can grant devotees who perform Aum japa and meditation on the meaning of Aum.”

For the sake of brevity (yeah right!) and because I’m in the middle of a number of other writing projects, both for Sthapati and school, I’ll attempt to explain why I might be using AUM instead of OM from now on – all in this post. To be as transparent as possible, this change isn’t so much about practicality or technicality, or a change in understanding. None of that has changed. It’s entirely about expression and my relationship to my ishtadevata, Ganesha. Plain and simple.

As someone who enjoys studying languages and understands more than a little about the inner workings of a number of languages, I’ve always found value in simplicity and, within linguistic contexts, phonetic approaches often serve big but simple purposes. O-M is one phonetic rendering of the pronunciation of something all Hindus understand to be supreme enough that it transcends most of our scope of comprehension. The symbol of our faith is one representation of our Highest, Brahman. It’s a bit abstract, although entirely intentional and the symbol itself is made of a combination of three Devanagari “letters” which correspond to most Western alphabets as A, U, and M, respectively. Spelled variously as Om, Ohm, and Aum (and maybe a few other ways?), it truly is pointless to insist that one rendition is better than another – although, I’m willing to admit that one rendition is somewhat cleaner than the others. 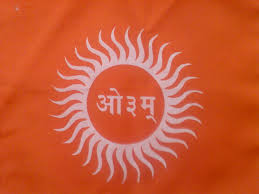 When I first encountered an attempt at “spelling” that transcendent Thing, it was A-U-M. I later adopted the phonetic spelling of O-M, in large part because everyone I encountered seemed attached to the three-letter-spelling and overemphasized those three letters when vocalizing The Word. Yes, you’re supposed to make the sound of the A, and then the U-sound, and then the M-sound, followed by silence. Satguru Subramuniyaswami affirms this. However, it’s safe to say that you’re “doing it wrong” if any listener can clearly distinguish between the three “letters” as you make their sounds. The A is not meant to be wide open like the “o” in “got.” The U is usually not mispronounced, but it is often too clearly separated from the A and the M. And the M itself is not meant to be created by the usual “humming” that ends up happening when Westerners make the sound with their lips. Anyone with even basic understanding of the Devanagari script will look at the Aum symbol, see the “bowl with a dot in it” at the top, and know the difference between a labial M and a nasalized M. Westerners too often end up sounding like ET saying “ouch” in the decades-old film, only with an M on the end… AAAH-OOOOW-MMM. That’s at least as “wrong” as using OM instead of AUM. Surely, there’s meant to be some grace and proficiency when enunciating the Primal, Causal, Sound. All of existence is held within Om/Aum, we should take care not to butcher it when invoking. An additional support for what I’ve just said about pronunciation can be pulled from the Ganesha Saharanama. One of His names is indicative, not only of how Aum should be approached, but also of Ganesha’s relation to the Supreme. You see, among many other names He’s referenced as “Ekakshara.” The name means “One-Letter” and is meant to be a direct pointer to Him actually being and personifying Aum. To my knowledge he’s the only entity in the Hindu pantheon referenced in this precise way. We’re literally saying His name when we invoke The Ancient Tone, and that tone is meant to be “one letter” – something supported by the very shape of Aum. In the same way that the three letters have been made into, and can be found within the One, Aum encompasses all stages of existence and all realms.

Ganesha, being referenced in myriad Hindu scriptures as the personification of Om, Itself, is an expression of The One that I find myself most inclined toward. The Satguru referenced at the beginning of this post is not a Ganapatya; he was the head of a very traditional Shaivate sect. Still, in the paragraph at the top and in many other places throughout Loving Ganesha and the other great texts he authored, Ganesha is extolled as having particularly unique place among humanity’s conceptions of the Supreme Divine.

In past posts, my expression of bhakti was questioned and even appears to have been taken to be borderline offensive. While I still have some less-than-smiley feelings about that and what it implies, I should admit that I’m not really concerned with that. So much of what I read, from the Ganapatya texts and the texts of many many other sects, affirms and confirms my thoughts, my understanding, and my feelings. My sadhana and the karmic expression within my unique life are also great encouragement for the path I’m making. But… I digress. No path is alive if it doesn’t (or isn’t able to) evolve. This evolution sometimes means foundational shifts. More often, though, it represents a modified way of moving along that evolutionary path – with the foundation or essence of the beginning remaining intact. This is what’s happening with my usage of Om. Let’s get back to that Ancient Tone, though, and how it’s written.

There’s nothing in the world wrong with utilizing a phonetic spelling. I’ll never attempt to convince anyone that A-U-M is somehow better or purer or more accurate. I don’t believe it is, really. However, from within the context of my own bhakti experience, I’m increasingly of the mind that the try-akshar (three-letter) spelling of the cosmic Ekakshara (one-letter) is cleaner and more fully indicative of my understanding of, and relationship with, Ganesha.

Ganesha truly is called Ekakshara. He is Aum. For many reasons unrelated (or only indirectly related) to Aum, I already understand and love Ganesha as The Supreme. As my personal Supreme, and being the traditional face of Shabda Brahman (Brahman as The Ancient Tone, as the Original Sound) as documented throughout Hinduism’s sects’ various scriptures, I understand Ganesha to be the beginning, the middle, and the end of everything. He supports the devotee in the waking, dreaming, and deep states of consciousness. Because of everything Ganesha means in my life, because of his personifying the Ancient Tone, and certainly in part because of Satguru Subramuniyaswami’s influence, it feels increasingly natural to me that I would adjust how I spell Om/Aum. Because my sweet Ekakshara is so cosmic, so universal, so all-encompassing, I feel it’s a sweeter and more wholesome tribute from my bhakti to express this with the triune spelling instead of the phonetic.

And there you have it.

4 responses to “I’d like to buy a vowel, please”