Opening page to “Chaturtho’dhyaayah” of the Bhagavad Gita

I spent a few hours at the temple this past Sunday, during my temple’s largest monthly gathering. We always collectively chant a chapter of the Gita when we gather like that (thus the name Gita Mandal) and this month our selected chapter was the fourth chapter.

A couple months ago the beloved and I went to Chicago with my parents. While we were there doing a million other things we walked past a “house” of the Brahma Kumaris. I recall that it was a nice, two-story older style home. I also recall that it was rather… Secure. There was a heavy black iron gate that surrounded the property and required a numerical pass code to gain entrance.

Prior to that time, I’d only heard the name but didn’t know much about the group. Admittedly, I still don’t know much about the group. I do know more than I did, though, after the recent trip to the temple where the discourse was given by Brahma Kumari Shubhra from Ohio. She was pretty, far older than she appeared, and like 90% of all other Indians in the United States she is very highly educated – holding a number of high-level degrees and teaching geology at a university in central Ohio.

This speaker went by the name Shubhra and is a 3rd generation Brahman Kumari. Everything she said made sense and I can see why it’s called Raja Yoga. One thing I will say about Raja Yoga is that it’s entirely consistent. I’ve studied a few different groups who would fall into that branch of yogas and their approaches are all very similar, as are their beliefs. 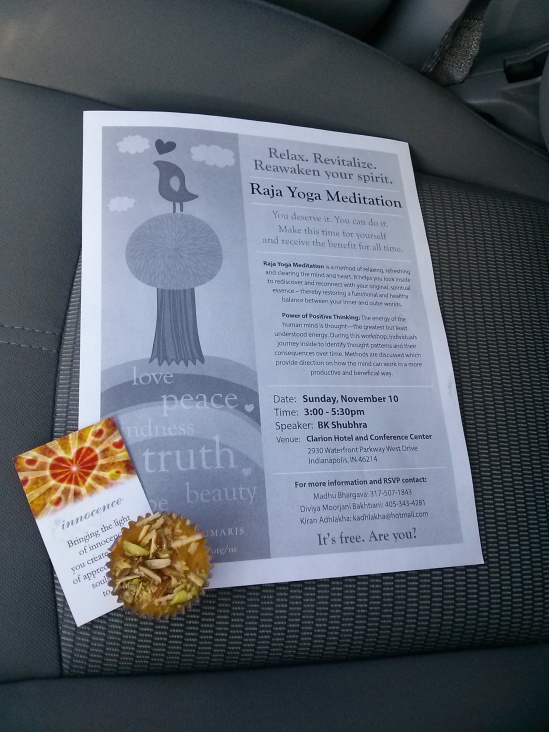 Handout and Prasad from the Brahma Kumari speaker

We ran through the usual liturgy at the temple (invocations, shlokas, dhuns, bhajans, and chanting a chapter of the Bhagavad Gita) and when it was time for the discourse, she came to the front to speak to everyone. Her discourse was entirely logical and filled with love, too. I find that kind of “doctrine” very appealing. You can’t argue with good logic and when love is in the mix – you don’t want to. I’ll admit, this is a group I’m not sure I’ll fit into but I’m definitely curious. I’ve reached out to the nearest BK group that registers on their site, which is in Cincinatti. And now I wait for a stronger connection to be made. We’ll see.

This kind of thing is one of my favorite parts of being a Hindu. In most cases, Hindus are encouraged to feel around. Explore. You must invest efforts needed to test the waters. Without that effort and without testing those waters in some way, you never gain experience. And without experience you won’t become much of a Hindu and you can be sure that your progress to wherever it is you intend to go will be slow. So slow.

One response to “Brahma Kumari Yogini”