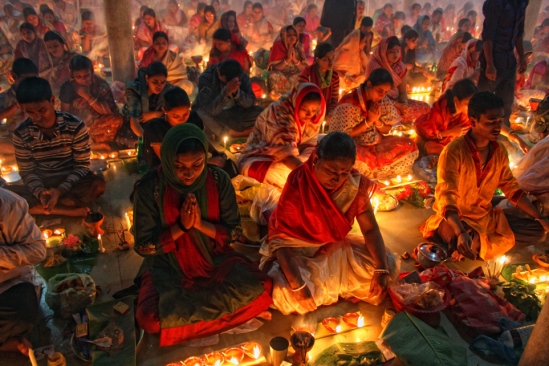 In the Heartfulness tradition (Sahaj Marg) we have a prayer – one prayer, that I’m aware of. It’s our “official” prayer if it can be said that we have one. According to one of our sites ( which you can access by clicking here ) this is a part of our practice employed at the beginning of the day and at the end. Abhyasis ( Sahaj Marg / Heartfulness meditators ) start and end each day in much the same way – a short prayer followed by meditation. In the evening we also “clean,” but that’s not for this post.

My default opinion regarding prayer is that it should be organic – living, and a bit unorganized. But, I can admit, that opinion of mine really only exists as a shell – hollowed out parts of prior religious experiences that don’t have much to do with spirituality. Many religious traditions use prayer and in many of those traditions prayer is something that comes pre-formulated. Hindus have mantras. Catholics have the Hail Mary. Even Muslims have pre-formed prayer that is recited at regular times and in certain ways – even their declaration of faith (Laa ilaaha illallah, waa …). So this is common to many paths. The more I think about this, the more logical it seems (to have formulated prayer, I mean).

I’ve said a number of times here on Sthapati Samanvayam that most of the prayer that seems to come from humanity is just noise – with not much of it amounting to more than, “Gimme, gimme, gimme.” Even the Prayer of St. Francis, which has always really touched me is in that category to some degree. We beg, demand, and insist to our idea of God that something we think we need or want should happen. Sometimes we just state what we desire, but often times we bargain with It, “Dear God if you do such-n-such for me, I’ll do such-n-such for you in return.” Think about that – bargaining with your idea of the Creator of the Cosmos. If there even is a Cosmic Creator, what then, on earth of all places and from a piddly human creature, do you think It could possibly need? And if you get beyond the idea that God could “need” something from you, tackle the notion that God actually wants something from you. It’s hilarious, really.

And beyond that hilarity, it’s selfish on every level and in pretty much every instance. I mean, even when we pray for someone else’s safe travel there’s an element there that is self-protective. Yeah, sure, you want your loved one to make it home safe and sound – for their sake – but also for yours. No one likes the pain of losing loved ones to a car crash, right? So when you pray, “God please grant safe journey to my mom on her way home tonight,” you’re saying two things – “Get my mom home safely, for her well-being” and also “I’m not ready to experience the pain of that kind of loss, so keep her alive longer yet.” I mean, honestly, have you ever heard someone pray, “God, I’m fine with the idea that my mom may be killed by a drunk driver tonight, but I don’t think she’d like that so please get her home safely. Thanks.” Umm, I’ve never heard that. We might not outright-ly speak the selfish side of our prayer (or we might, whatever) but it’s virtually always there – at least when prayer is organic.

So, for me, a pre-formed prayer is usually “better” than the usual kind of prayer I think people use. There could be many reasons for this, but one that stands out in light of things I just wrote is that the prayer can be prayed without ego actively involved in the process. This is one time when taking the easy route perhaps has more merits. With a pre-formed prayer you are still engaged – you enter a prayerful bhav and you’re usually in a place that has that “vibe.” You probably will have your mala / rosary to count the repetitions. A lot of divine things still apply, but the part of you where the ego has the most effect is less involved and in some cases might be entirely absent.

In the Sahaj Marg prayer, there’s no asking. There’s not really any begging or pleading or bargaining. Our prayer is really just a statement…

O Master!
Thou art the real goal of human life.
We are yet but slaves of wishes putting bar to our advancement.
Thou art the only God and Power to bring us up to that stage.

In our practice, the word Master is used in two meanings. We refer to the gurus in our lineage as Masters and we call the Guru within the same. This prayer, to be clear, is not a prayer to the guru, but to the Guru. Our lineage masters are those guides on our shared path who help to direct and assist us on our journey to the Master within each of us. Naturally, we revere them and respect them and value them greatly, but they are in no way any kind of religious dictator or ruler. Anyone who has interacted with our masters or observed them via video, audio, or text will attest to as much. Our masters are gentle, patient, and not only possess but exhibit immense understanding and compassion.

So when our hearts speak, “O Master….” we’re calling the deepest and truest part of our existence as human beings. The Center and the Goal – which is indicated in the next line of the prayer. The next two lines couple nicely. We recognize a condition inherent to living a human life – we’re filled with wishes. This is the “Gimme, gimme, gimme” mentioned earlier. These wishes keep us from peace and keep us adding to our samsaric layers. We stop our own advancement and That which is already within us, which IS who we truly are,  is the only solution.

One response to “Prayer”