It’s been more than a month and a week since I last wrote anything on here… I am ever amazed at how quickly life escapes through the cracks and gets out of hand. This is mostly a good thing, but can also be bittersweet. Finding or making time for life and only life – while stepping away from life – is super important, though, and for the first time in a while I was able to do this. The occasion was marked by the annual celebration of my path’s Adiguru / Satguru whose name was Shri Ram Chandra of Fategahr – otherwise known as Lalaji.

The celebration, as I understand, usually falls closely to the Hindu fest of Basant / Vasant Panchami, which is often just said as Basant / Vasant. I first knew of this holiday as a celebration of students and learning and wisdom and the goddess of those things who is called Saraswati (pronounced Sahr-ahs-swah-tee). This year, though, for the first time ever I was able to attend a bhandara at the nearest Sahaj Marg ashram to where I live, which is in the next state over. Ohio. And it truly was a memorable experience.

Abhyasis who are local to the ashram often host those who are traveling to the area, which can amount to a good $300 or more in savings when a hotel stay is avoided. For my first time, one of my local prefects extended an offer to me from a prefect local to the Beaver Creek Ashram. Her name is Uma and I was very pleased to meet her, although I declined the offer. Perhaps in the future I’ll take her or another up on an offer like that, if there are such offers, but for my first time I really felt more comfortable staying in a hotel in the area. And it was quite comfortable at the Hilton Garden Inn.

The first day for me started quite early. I had done some prepping on the Thursday night prior, but most of my packing and prepping was done the morning in which I left for Ohio. My husband took me to the home of a local prefect, Janmarie, and together she and I set off to Ohio. That was at around 0530 or 0600 that morning. We had to be in Ohio and at the ashram to assist with set up and other preps for the day. Aside from the extra-early start that first day, each day of the weekend was much the same. Lather, rinse, repeat. Yes?

Each day started around 0800 or 0900 with breakfast and everyone convening for the first meditation of the day. It was how each day started – which is typical of our practice. From there, the days all followed about the same general pattern. Breakfast, then an hour of meditation. Then an hour of maybe a reading or short spoken lesson or something. Then another hour of meditation. Then something else like a video or another reading or a small group activity… for about an hour. Then an hour of meditation. Each day went like this and the routine really was only broken up by lunch and a short break in the morning and one in the evening. At the end of each day, dinner was shared. After that the Universal Prayer – said nightly by all abhyasis at around 2100 (local time). We would then dismiss and meet again the next morning. Friday and Saturday were spent in this way – a good 12 hours of meditation and reflection. Sunday was the same really except for being shorter. We dismissed just around 1400, which took us until just when lunch was finished. Otherwise, Sunday was the same as Saturday and Friday.

I was fortunate enough that this ashram has a bookstore and I certainly took advantage! For just under $100 I was able to get my grubby paws on just under ten of the path’s published texts which was a nice boost to my growing collection.

Sunday morning (I think!), a local prefect from Indy area, Manisha, gave the sitting for all abhyasis in attendance. She’s a sweet soul and hasn’t been a prefect for very long and has never led such a number of people in meditation before – Indy’s community is smaller. On Sunday, after lunch was eaten, Manisha and I headed home. I was very fortunate that she was able to bring me home Sunday, else I would have had to end the weekend a day earlier which is when Janmarie headed back to Indy.

The drive from Indy to Dayton is a fairly straight line running East-West and normally takes only a couple hours to travel. That day, however, it would take Manisha and me far longer to get home. There’s an exit for the town of New Castle and it was right around there on Interstate 70 that Manisha and I hit a patch of ice just before entering a bridge. Had the patch of ice been 10 feet sooner we would likely have ended up in the river that our bridge crosses. Instead, what happened was that we hit the ice, our front end swiveled toward the side of the bridge and we hit that. This caused the car to ricochet and sent the car into a spin. Our karmas then mandated that we spin all over the place in the slow lane of the interstate before moving into the fast lane and doing the same. At one point, the car caught some snow / grass on the far side of the fast lane and this stopped our spinning – with us facing the wrong way, in the fast lane, sliding backwards. We came to a stop along some guard cables – still facing the wrong way, still on the fast side of the interstate.

Soon after coming to a stop, and while we were both checking our senses to be sure we were alive and well, a stranger stopped to help us. He was able to get the car out from where it had stopped, across the interstate to the slow side, and facing the direction of traffic. He looked the vehicle over, very reluctantly accepted money from me, and then left.

For the next hour Manisha and I were on and off the phone with 911, her husband, and her auto insurance company. It was quite exhausting ironing out the necessities of the moment. A police arrived and gave us a report – which, by the time it was done, we learned was unnecessary. WE attempted to drive a bit, and did drive for about 50 feet. But then heard a strange noise with the car and became scared so we stopped. A short while later, though, we decided to at least brave a drive to the nearest exit, and so we did. When we got there we did another inspection of the car – the damage to which appeared to be mostly cosmetic, despite the odd noise we heard. From there we chose to continue the trek home since the weather was getting worse by the minute.

By this time, however, the interstate was getting really backed up due to a big accident a few miles ahead of us. Using her car’s GPS we rerouted and found our way to her home in Indianapolis / Fishers, but not before winding our way through the most remote country roads I’ve ever been on which took us nearly as far north as Anderson! I tried staying in touch with my husband the whole time and shortly after we arrived at Manisha’s house he was there to get me and then I finally was brought home. Manisha did so well through all of it – never once losing her cool or panicking. We were so glad to have had each other’s company during the ordeal and feel it help seal a real bond between us. Considering things could have ended very badly had we hit the initial ice a few feet sooner and missed the bridge, or been struck by another vehicle while we spun everywhere, or god forbid another mishap while we were so far out in the country, I believe this experience was guided as by guru kripa.

Despite battling a bit of a head cold the whole time, and the near death experience, the weekend was lovely and I look forward to future gatherings and celebrations. I’ve included a number of pictures from the weekend below. 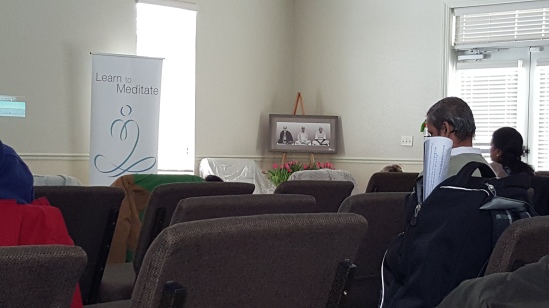 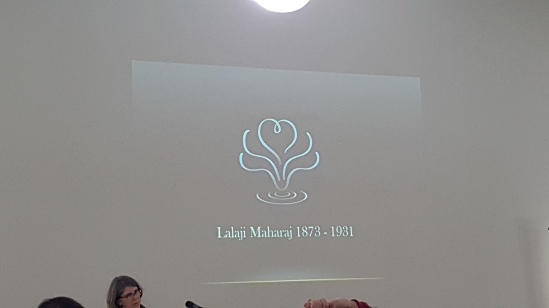 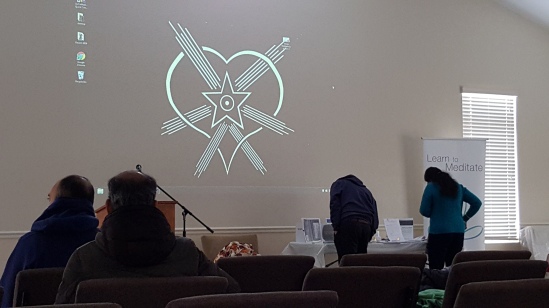 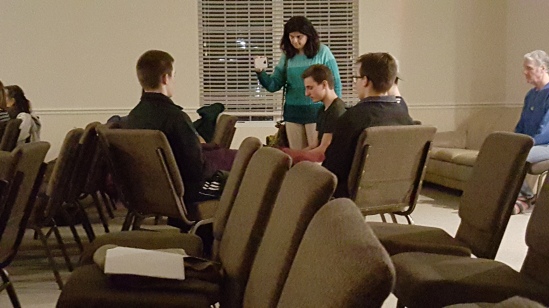 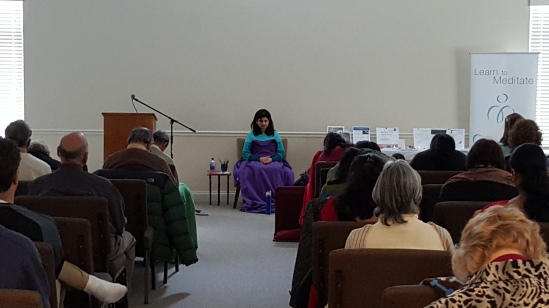 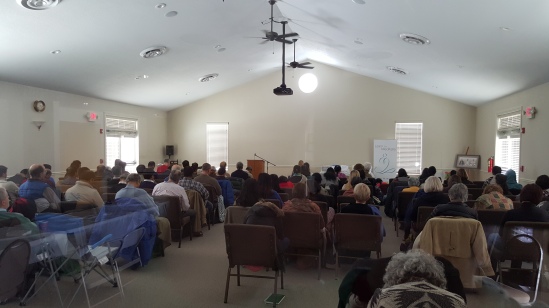 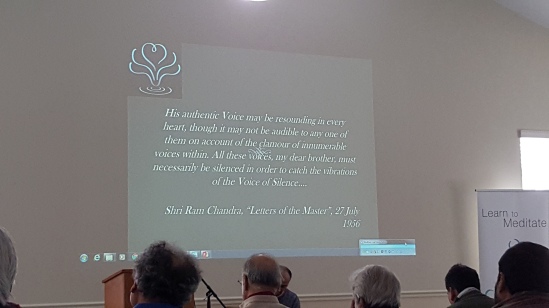 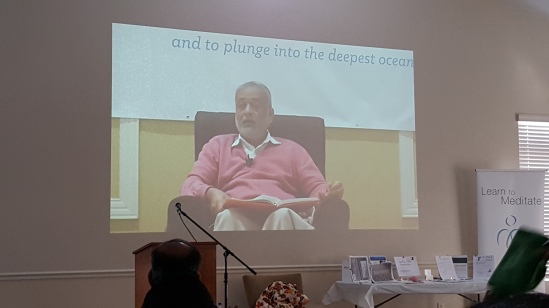 One response to “Lalaji Bhandara 2016”